During March and April the framing job on my home was reviewed by five general contractors and experienced professional framers, an independent licensed framing inspector, a municipal inspector, a licensed engineer, and others. Everyone caught different mistakes, but the picture that emerged was consistent and very clear. 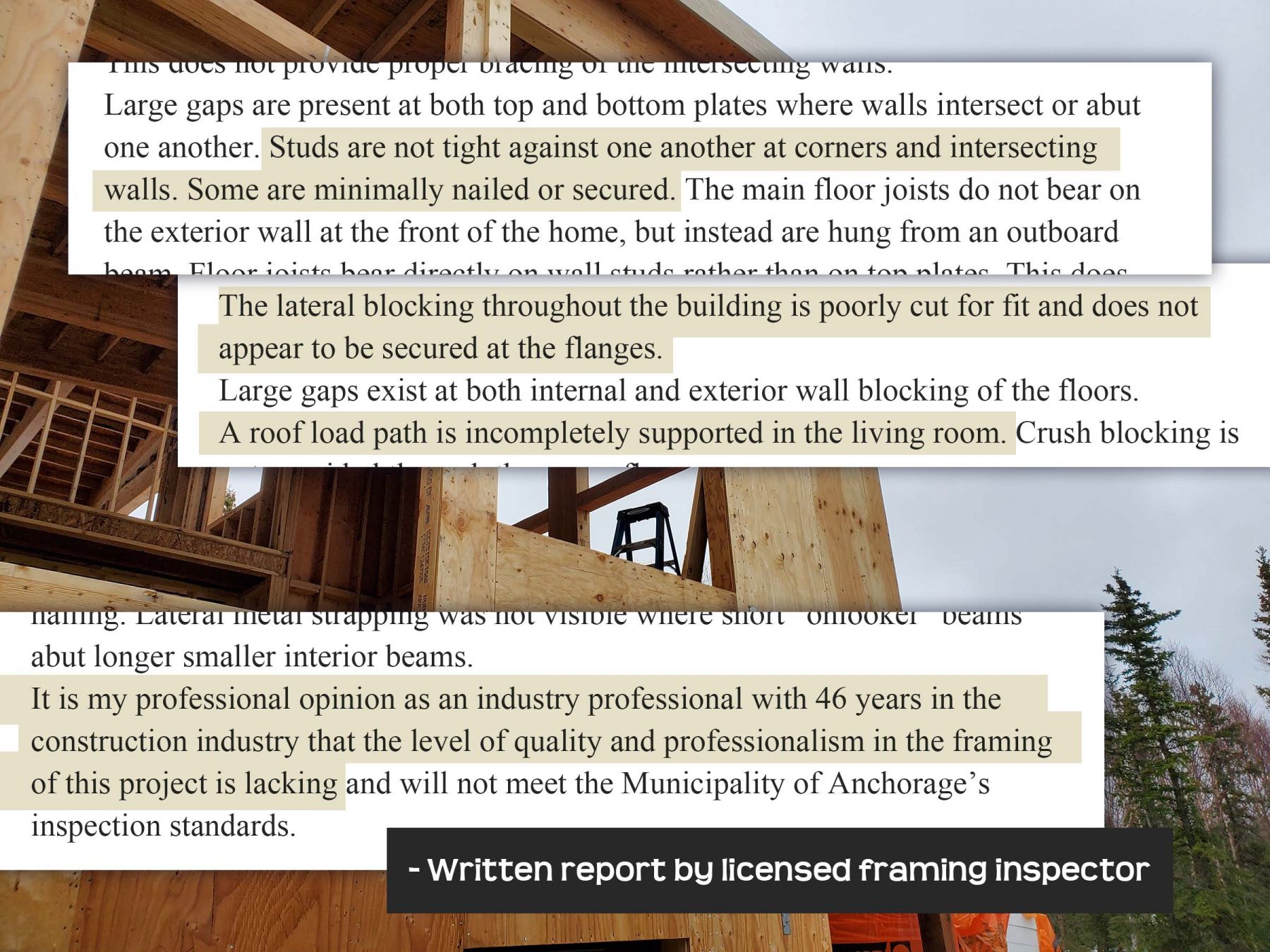 “They must have really been rushing,” one longtime framer told me, “There’s a lot of shoddy workmanship here.” While taking a break from installing the septic tank, my excavator walked around shaking his head: “This is just terrible. I’m looking around here for some good work and I’m not seeing anything. What a bummer.” After reviewing dozens of photos, an exec at of one of Alaska’s largest construction operations wrote, “This guy needs to have his license revoked. This is possibly one of the worst framing jobs I have ever seen. Who the hell is the contractor?” 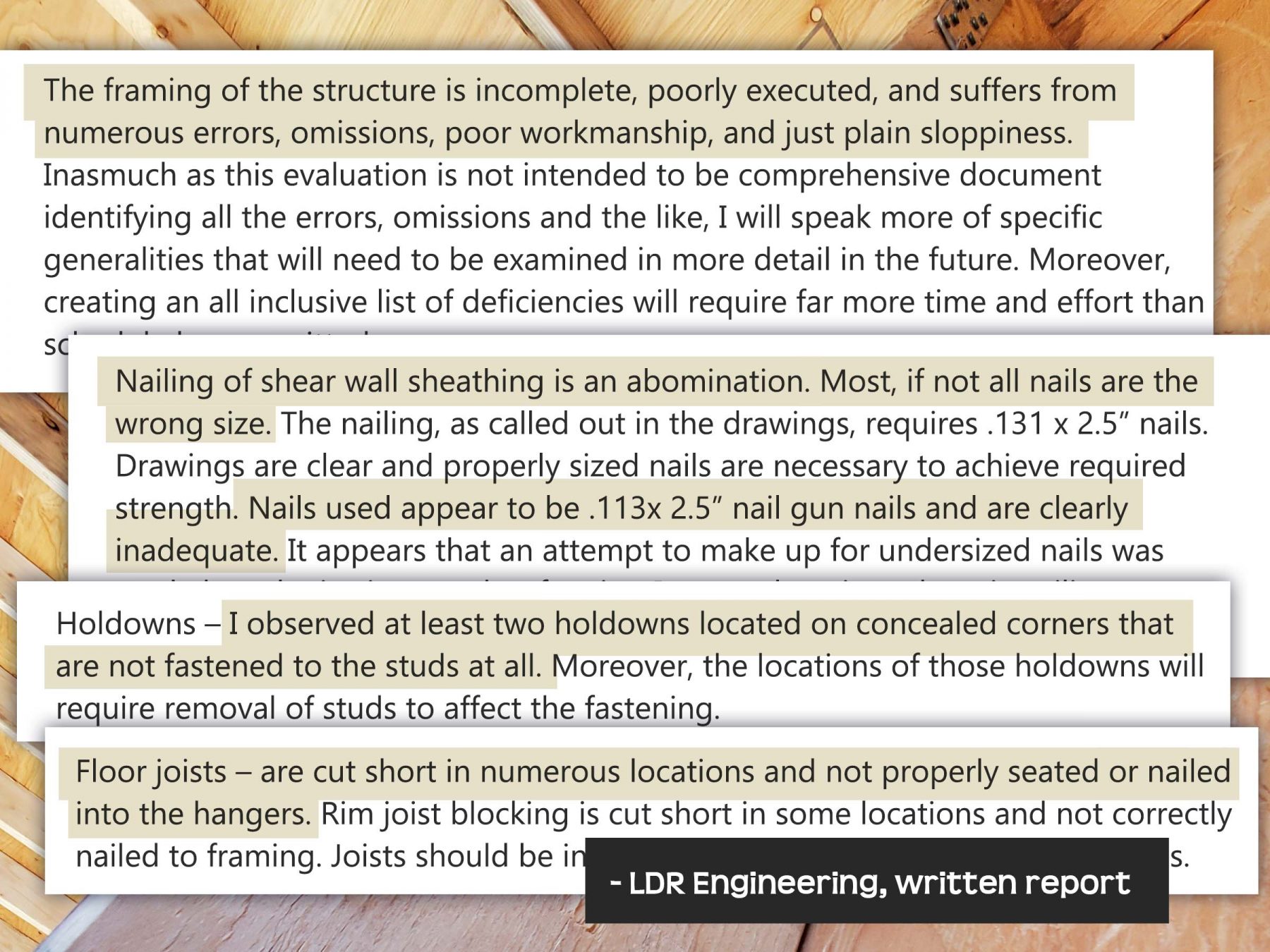 An independent framing inspector’s written report noted numerous structural flaws, examples of deficient craftsmanship, and rampant code violations. He concluded: “It is my professional opinion as an industry professional with 46 years in the construction industry that the level of quality and professionalism in the framing of this project is lacking.” The Municipal inspector wrote a three-page-long laundry-list of errors, including improper nailing, incorrect wall widths, mis-installed hardware, structurally unsound work, and critical wind/seismic shear walls built incorrectly. 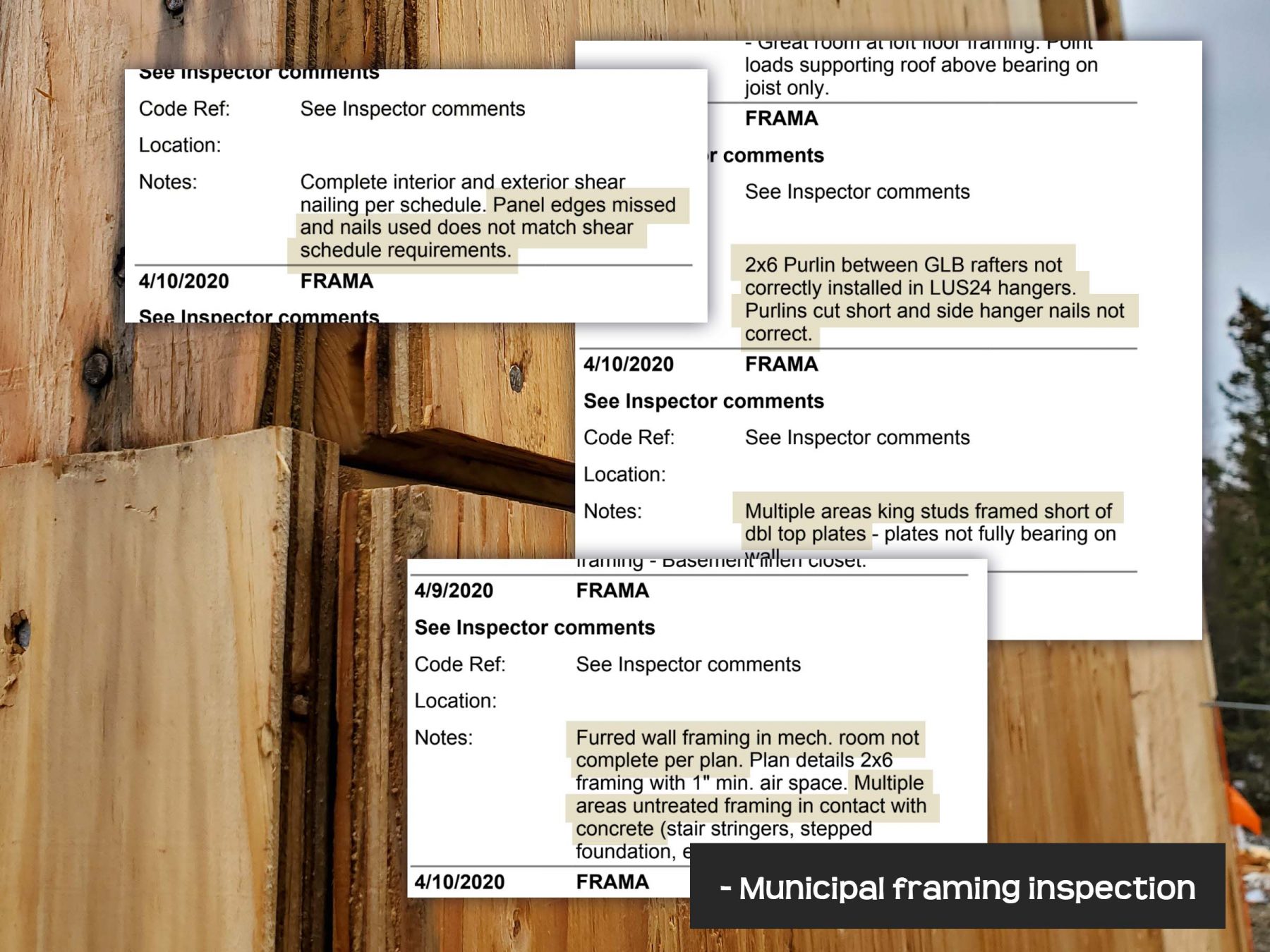 The licensed engineer’s written report was blunt: “The framing of the structure is incomplete, poorly executed, and suffers from numerous errors, omissions, poor workmanship, and just plain sloppiness… What I observed of the work suggests significant lack of knowledge and experience of the part of the framing contractor. Or, perhaps a completely indifferent attitude toward quality construction… I have rarely encountered workmanship this poor in last forty years plus, including homeowners work.” 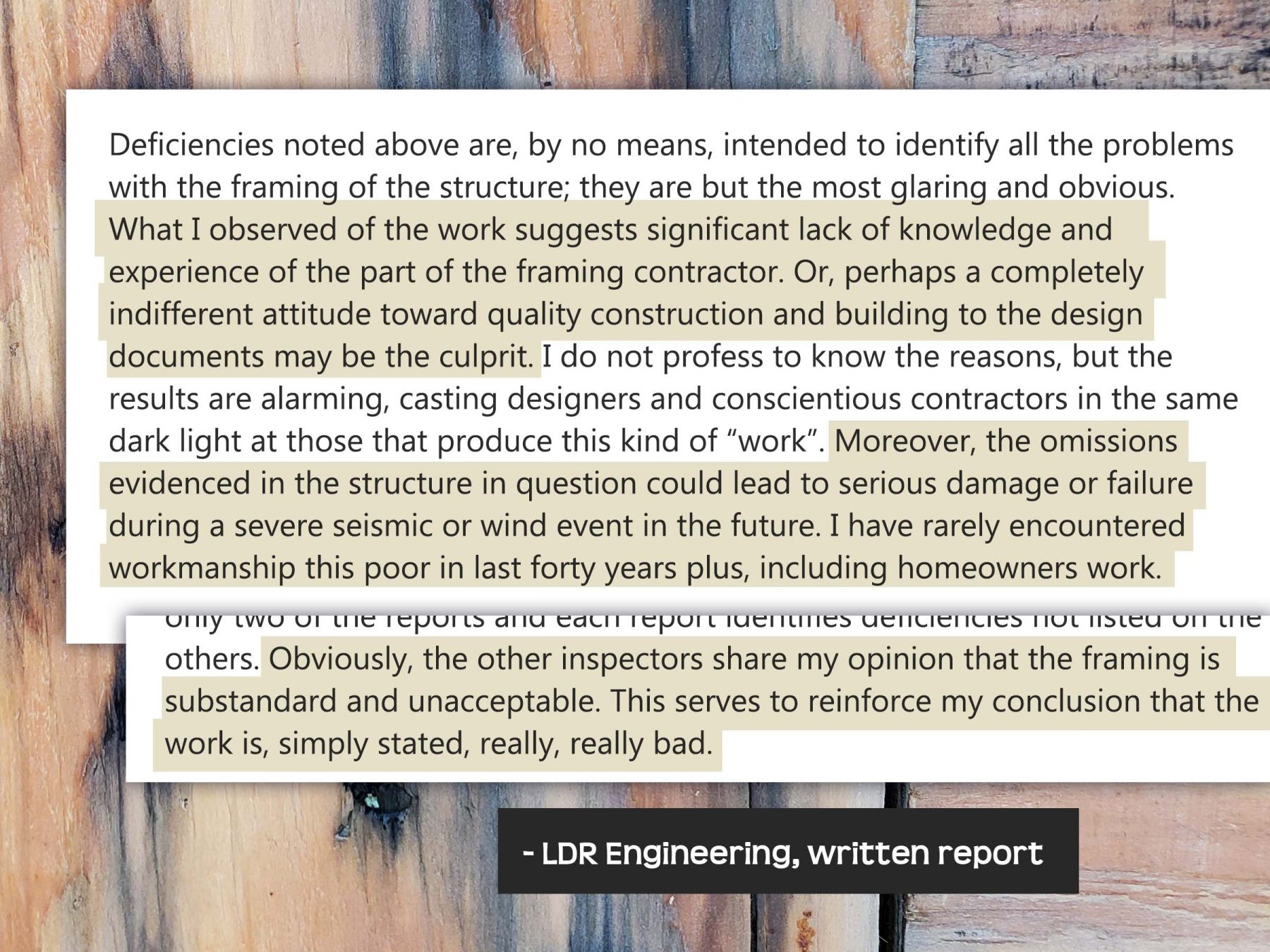 This feedback was extremely discouraging. Of course, identifying problems is the first step toward fixing things. But man, that excavator was right. What a bummer.

Click on a thumbnail below to read the full inspection reports from the independent framing inspector, engineer, and Municipality of Anchorage in PDF format. 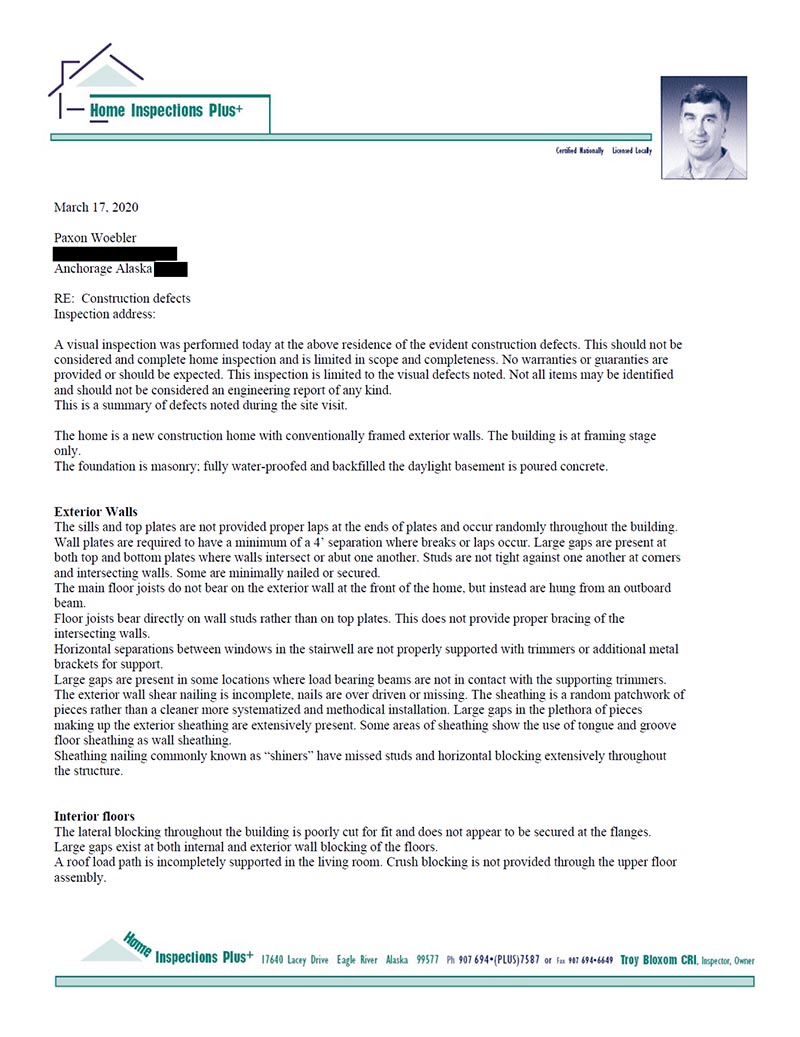 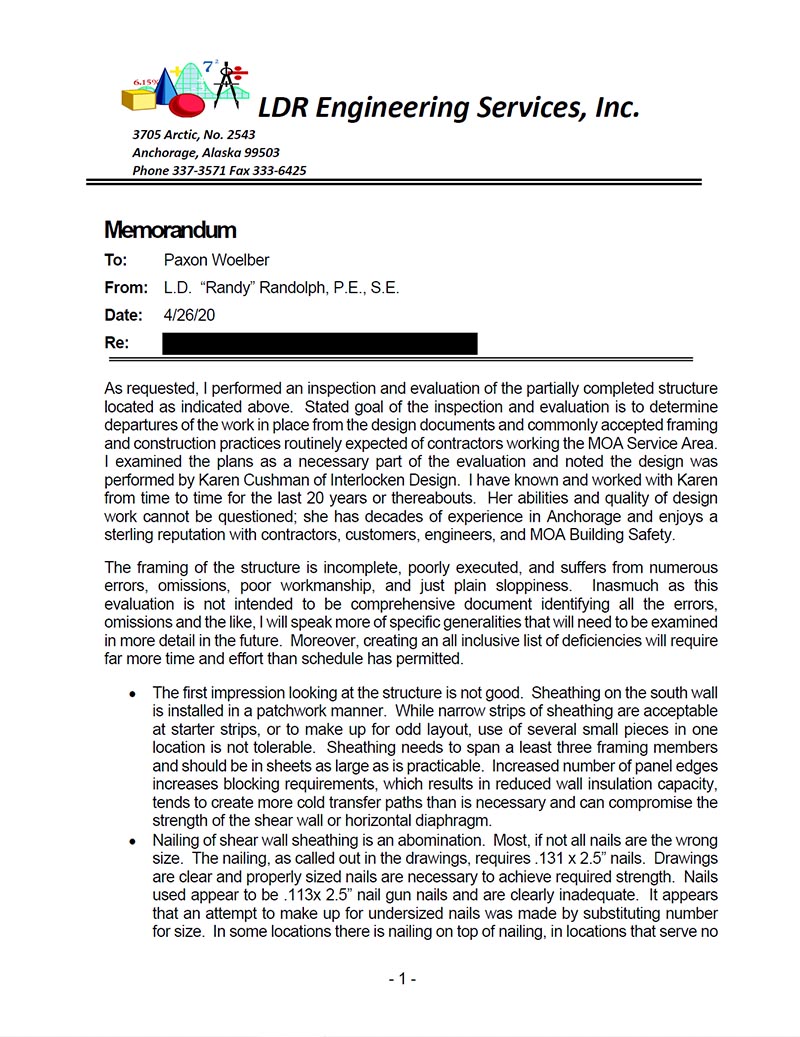 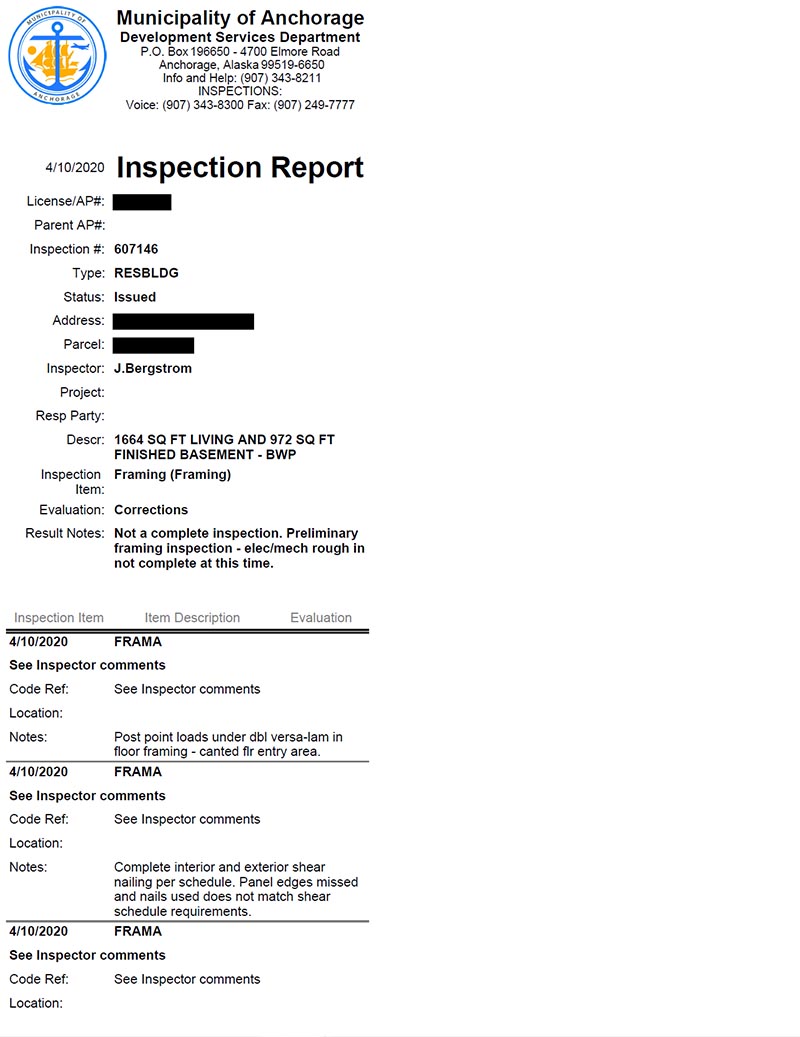