A while back, Remote Alaska Solutions reached out to ask whether I’d considered ICF for my project, and they invited me to check out a couple of their job sites. ICF stands for “Insulated Concrete Forms.” In ICF construction, hollow interlocking foam blocks are used as forms for poured concrete. These foam forms are left in place after the pour and function as insulation. ICF proponents cite the technique’s simplicity, energy efficiency, and resistance to rot, insect, fire, water, and structural damage.

I told Remote Alaska Solutions I’d take them up on their offer and asked whether they’d do a short interview for the AK House Project website. On July 15, I visited two of their ICF jobsites and got to talk to president Seth Kroenke and general manager Kevin Clark. We had a great conversation about ICF basics and how ICF construction works in Alaska. Anyone considering new construction should be aware of ICF and know that it’s an option.

Note: I hope to do more posts like this with local companies throughout my build. There are some cool things going on in the Alaska construction world and I think they’re worth sharing. This is *not* a sponsored post and I received no compensation of any kind for doing this. 🙂 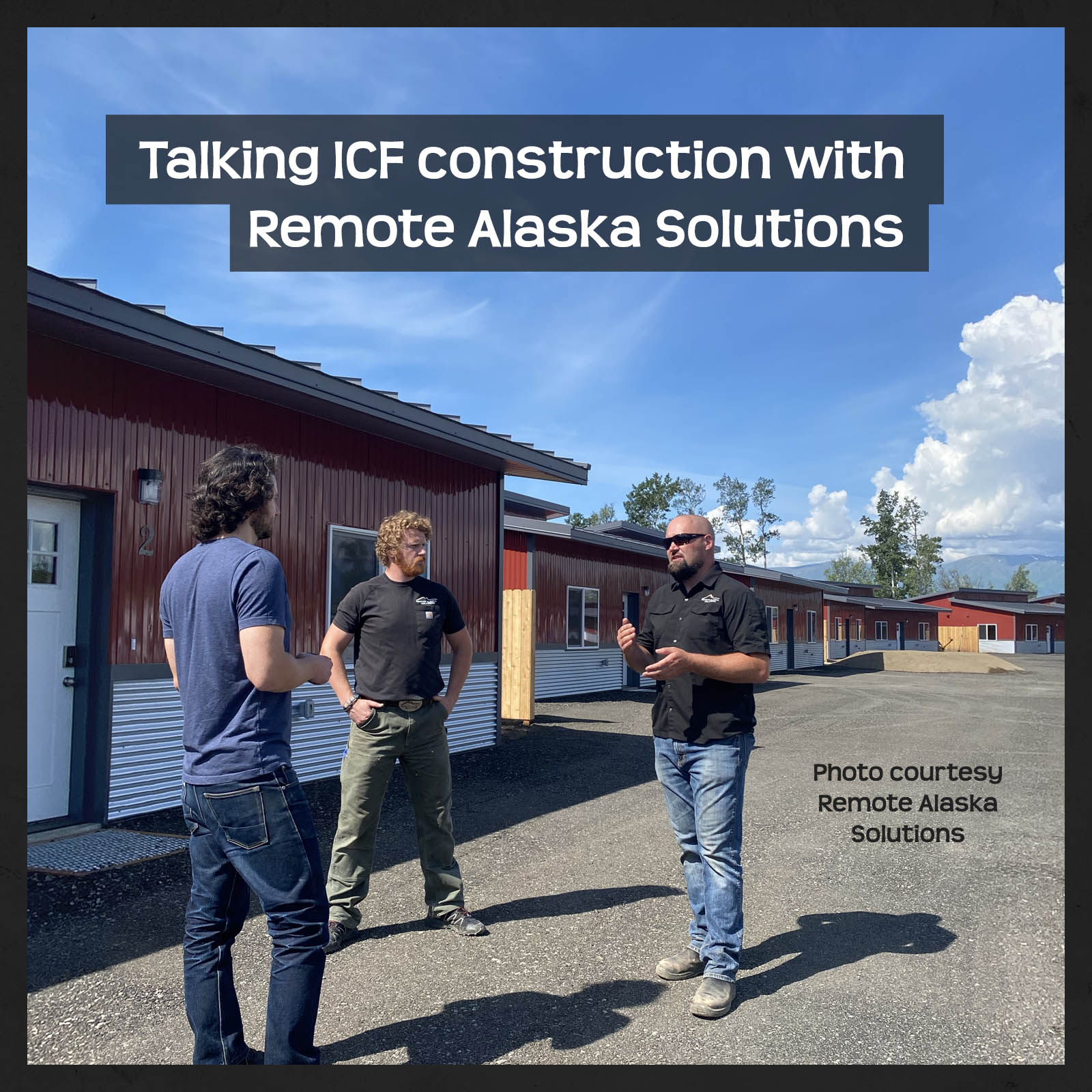 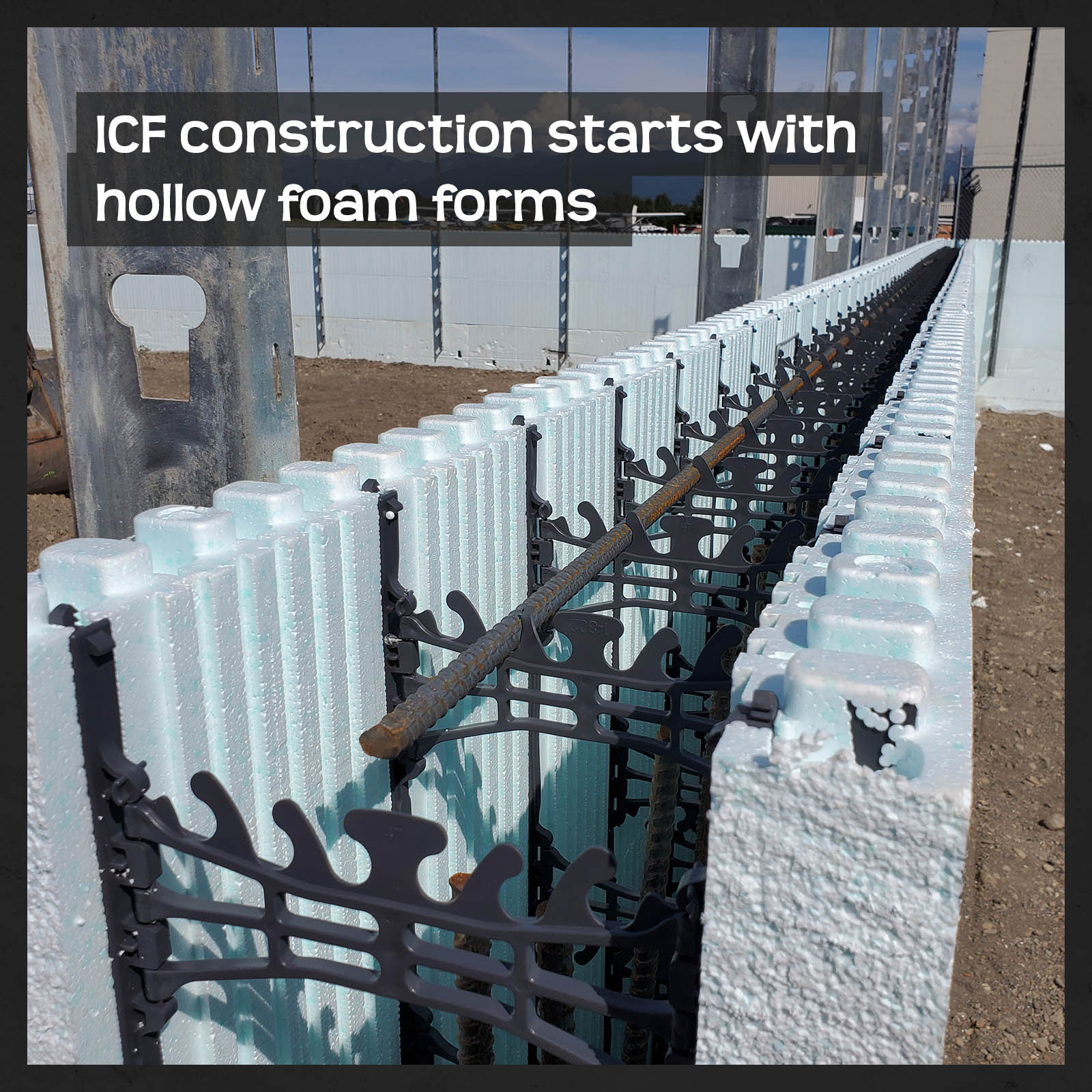 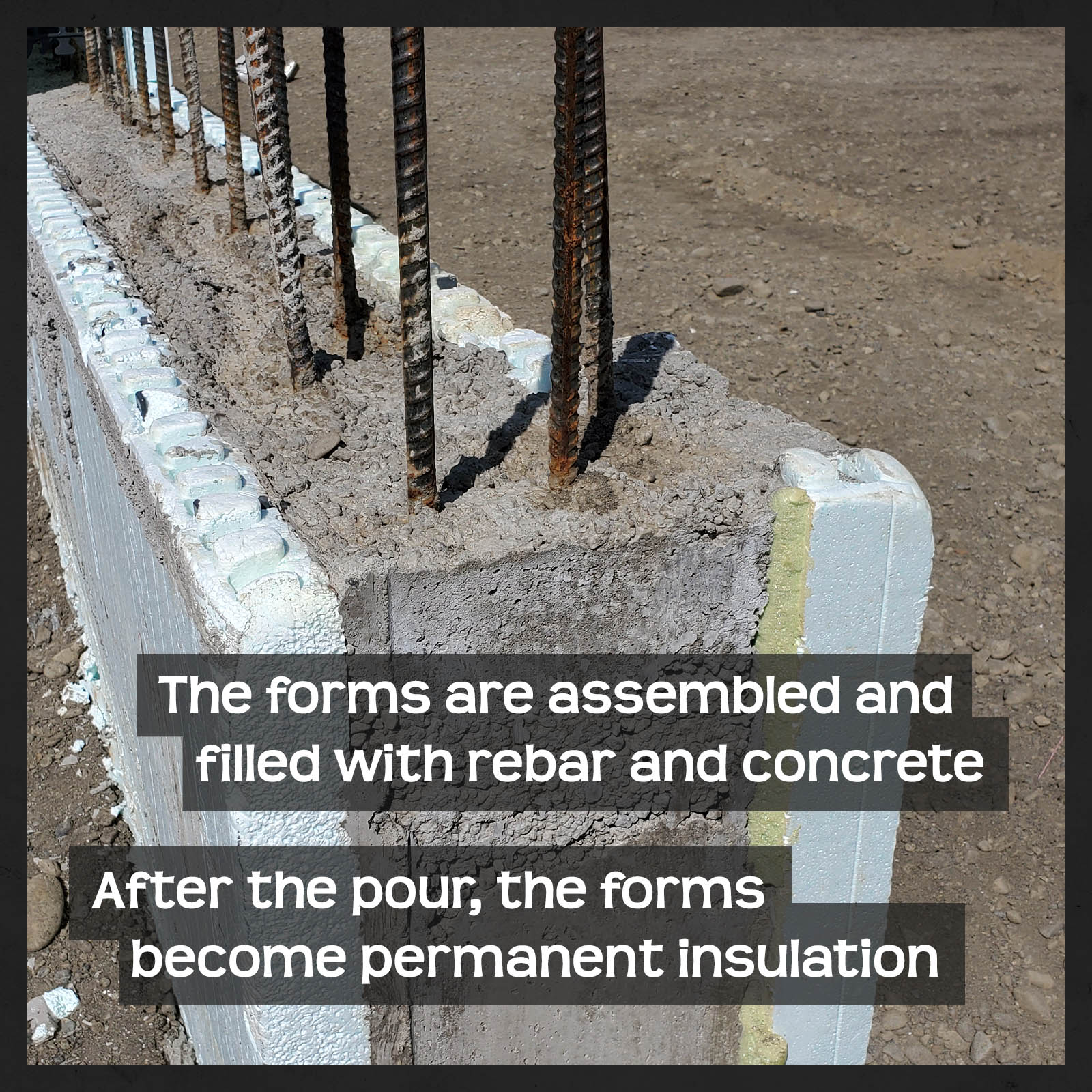 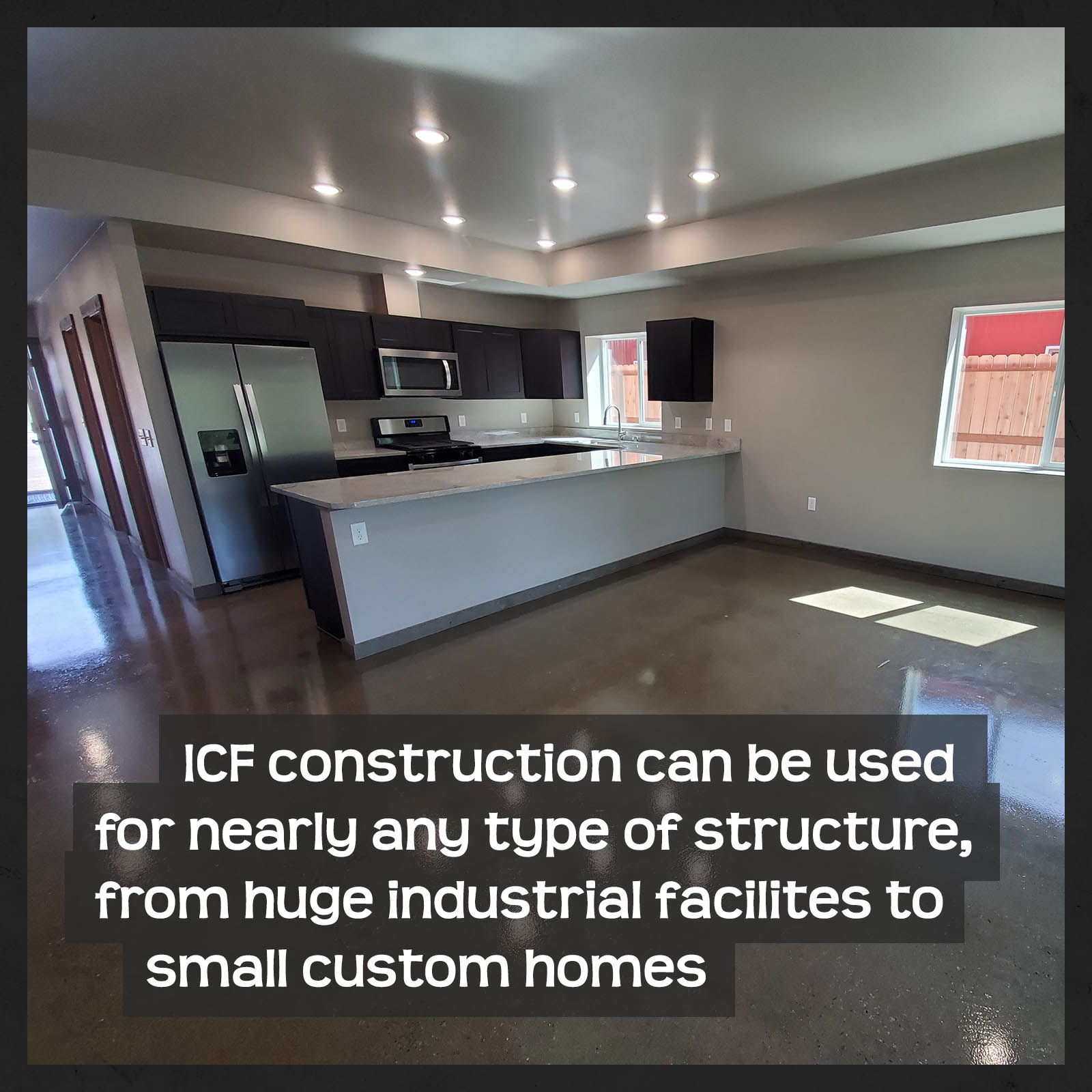 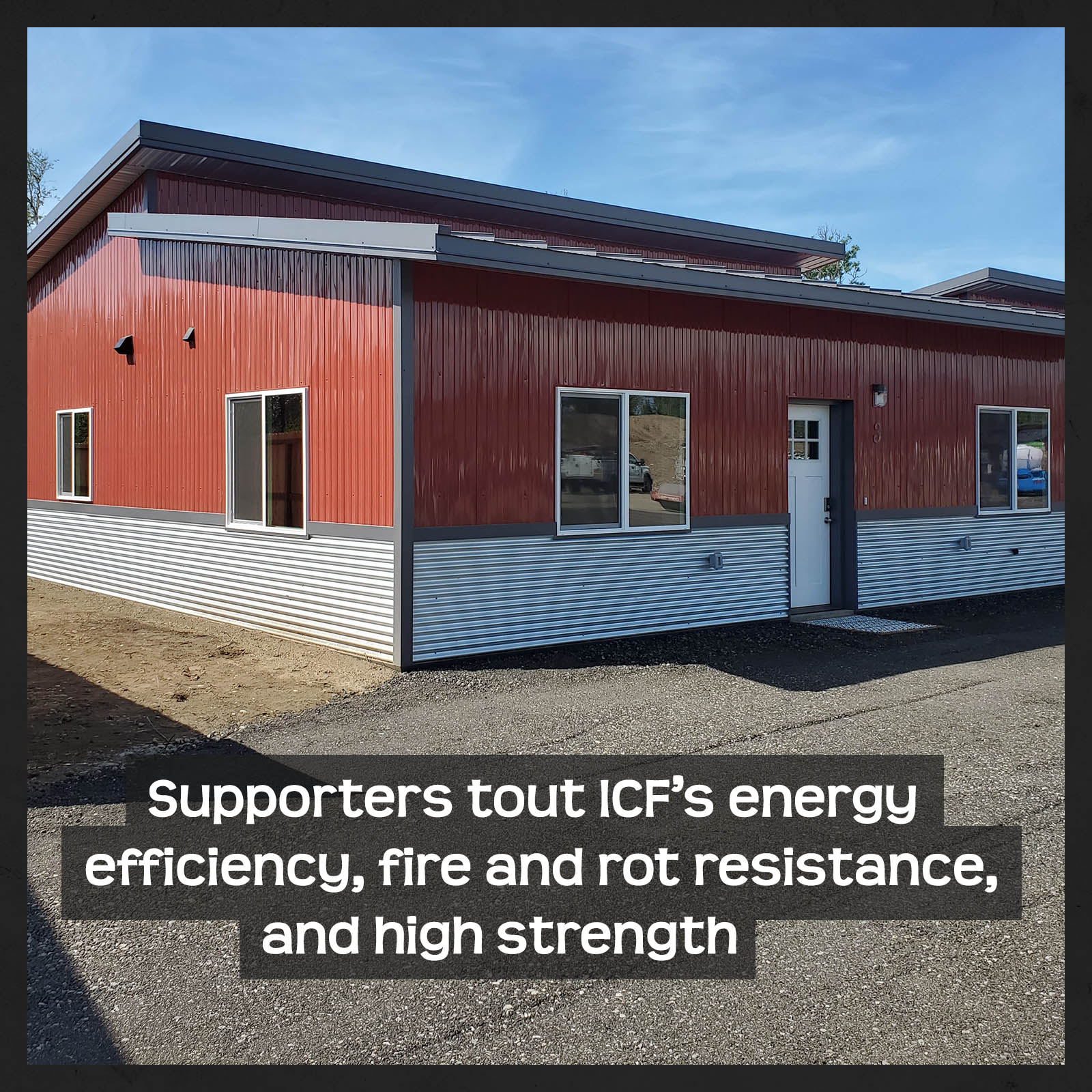 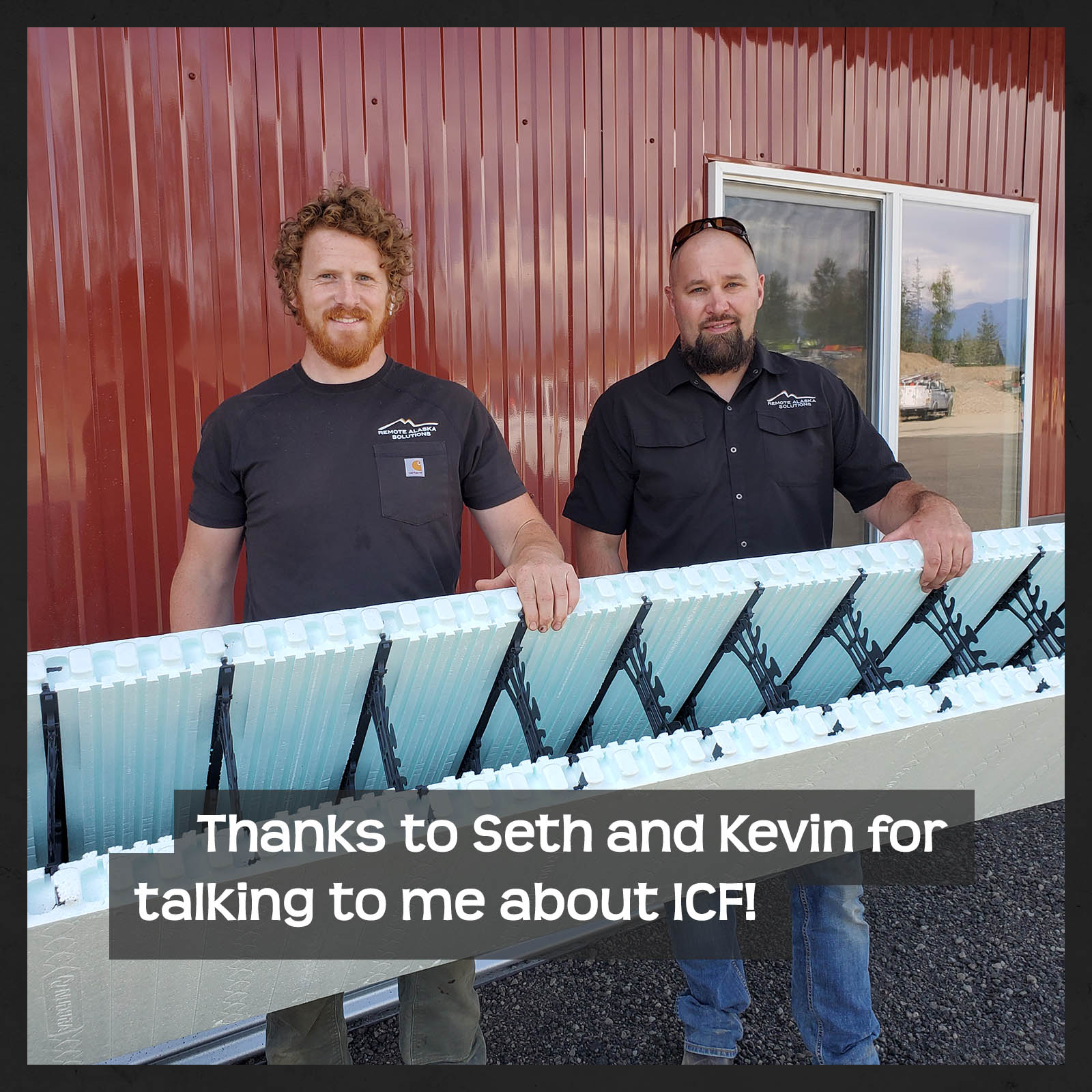 Paxson: Can you tell me what ICF is?

Seth: Insulated concrete forms, ICFs for short, are essentially like hollow EPS foam lego blocks that are stacked, rebar-reinforced and poured-in-place with concrete.

How is that different from conventional concrete construction?

S: Structurally, an ICF wall isn’t a whole lot different from a poured concrete wall. But a conventional concrete wall needs to be furred out and insulated on both sides. In the case of ICF, you automatically have insulation on the inside and on the outside, with furring strips already integrated into the system. The benefits of ICF are in the labor savings up front, and then the insulation savings after it’s complete. As a builder, the number of times you need to go around your building is drastically cut down. We’re capturing six construction steps in one.

So you have EPS foam on both sides of the concrete wall. You wouldn’t do that in wood frame construction because you’re creating a double moisture barrier [ie, trapping moisture between two impermeable layers]. But with ICF that’s not a problem?

S: No. The reason why that’s so critical in a wood wall is because wood isn’t resistant to moisture. Once wood gets wet it molds, it rots; it’s going to deteriorate. With concrete it doesn’t matter. Concrete doesn’t deteriorate with water. So this double vapor barrier concern goes away, and your whole assembly becomes your vapor barrier with a perm rating that is better than 10 mil poly (most wood framed houses use 6 mil).

So resistance to rot is an advantage with ICF construction. What are the other advantages for doing ICF over wood framing or steel framing?

S: I think first and foremost is the R-value. So, the independent studies have come back where these things perform equivalent to an R-45 or R-50.

You’re talking about a total of 5 inches of EPS, which is technically R-24. And concrete has an R-value pretty close to zero. So in what sense is [an R-24 ICF wall] effectively R-45 or R-50?

S: It’s thermal mass. It’s a very complex relationship, but it’s very similar to a log home. Wood doesn’t have an incredible R-value, but we all know a very tight log home performs incredibly well. A log home that has very nice, say, 12-inch walls—once you get that thermal mass heated up it’s going to take days [to cool down]. Same concept with concrete, and it’s even a couple steps further in the right direction because we don’t have any air gaps, and we have insulation on both sides. So when you put that all into a model of how the assembly performs, ICF gives massive benefits. Right now [our new housing development] already has a five-star plus energy rating — with an R-24 wall.

Kevin: And we’re going for six-star.

S: The next [advantage of ICF] is the fire rating. You get a four-hour fire wall. Next would be the 250-mile-an-hour wind rating. That’s hurricane, gale-force winds. You can get online and see examples where hurricanes and tornados went through and the only house left standing is an ICF house. These walls will be here for generations. Five, six, seven hundred years. When you think about concrete as a building material, you think back to the Roman Empire. They’re the ones who developed concrete 2000 years ago and it’s still our most viable building product today.

S: It’s probably the strongest assembly that money can buy.

S: Yep. Steel framing is good because it’s ductile and flexible. But it isn’t nearly as strong. With rebar-reinforced concrete you get the massive strength of concrete and you still get the ductility of steel integrated into the concrete.

When you’re talking about energy efficiency, are you taking into account the energy that it takes to make all the concrete?

S: Yeah! There’s tons of studies for green building. And concrete is renewable—we’re using rock and sand. It’s probably the substance we have the largest quantities of on earth. And the other thing in it is water. The only environmental impact that concrete has is the making of cement, and in making a house [the size of those in the current Remote Alaska Solutions development] it’s two and a half truck loads of concrete. So it’s far less than what people actually think.

K: I mean, your timbers have to be milled at a lumber mill. You have all the ancillary equipment to harvest the timber, to process the timber, to get the timber to the stores, and then to deliver it here. That’s a lot more steps and a lot less energy conscious than concrete.

Is the sand and gravel that you build with from Alaska?

K: For our remote projects we have what we call a volumetric mixing concrete truck where we can locally source our gravel and aggregate on-site, and mix those inputs with the cement in our truck. So we use the sand and gravel from that village to make the concrete we’re putting down for the slabs or the ICF wall packages.

So you can do remote construction without shipping in enormous amounts of material?

S: Yep. The key is not shipping in rock and sand.

As far as doing this in Alaska, when I had my slab poured it was just a little bit too cold and we had to tent it. It added a lot of expense. I can’t imagine you’re doing a lot of pours in the winter. So do you have kind of a narrow season?

S: I’m glad you asked that. Remember, these things are insulated and during the hydration [curing] process concrete creates its own heat. So we can pour these all year round, and the only thing we have to protect is the top of the wall. Once you get past three days the concrete has enough strength to counteract the freezing process. We’re seeing the top of our walls melt snow for five, six, seven days. So we’re actually building in Alaska year-round.

So what’s the reason every single building isn’t built out of ICF?

S: I think it’s largely due to the marketplace not being educated about their options. I think there’s a preconceived notion that this stuff is expensive. And it’s not. We can sit down and I can show you case studies where just the initial construction might be slightly more expensive. But one or two years of energy bills and you’re already ahead.

Do you think people have a hang-up with concrete because they think their homes are going to look industrial or unfinished or something? It sounds like you have a lot of flexibility with how you finish an ICF house.

S: We probably have more flexibility actually. We can do EFIC or Stucco, we can do concrete board, we can do metal siding, we can do wood siding. Vinyl. Stone. You pretty much have your pick of any aesthetic finish or architectural feature you want.

So you wouldn’t even know if a house was ICF construction?

What kind of projects do you do? If a homeowner came to you and said ‘I want to do ICF’ would you do that?

S: Yep. We believe in this technology enough to pretty much open up our doors to any request. So we’ve done stuff as small as a 1,200 square foot shop and garage, all the way up to a 25,000 square foot hangar, and anything in between. We’re probably having our most success at the private level with commercial. Banks, hangars, offices. We’re also having success with multifamily and custom homes.

If I understand correctly you’d do this for the foundation wall? What do they do about a waterproofing the exterior?

You can use ICF for as much of the building as you want. It’s sometimes used just for foundation walls, but there’s no reason that you can’t extend the ICF wall above-ground too. The Remote Alaska Solutions development that I toured for this interview was built entirely out of ICF. That includes all of the above-ground walls you can see in my photos.

The concrete portion of an ICF wall is sandwiched between waterproof (or highly water-resistant) foam on both sides, including the exterior. Even if water does make it past the foam, one of the great things about concrete is that it’s porous but isn’t really harmed by water. Even exposed concrete structures (think buildings/bridges/etc.) subject to heavy use and freeze/thaw cycles can last many, many decades in Alaska.